Since 1995, one of the key locations for e.g. in situ testing of EDZ and rock mass strength has been the Äspö Hard Rock Laboratory (HRL) in Sweden. The Äspö HRL was designed as an underground research laboratory for future geological nuclear waste disposal concepts. Although the Äspö HRL was not designed as a nuclear waste disposal site, the rock conditions are suitable for disposal. The LVDT stress measurement cell was tested in TASA tunnel, which was mechanically excavated by a Tunnel Boring Machine (TBM) in Äspö at -440 m depth, and in TASS tunnel excavated using Drill-and-Blast (D&B) method.

Since 2004, Posiva Oy has built an rock characterization facility in the Olkiluoto Island, located in Western Finland. Located at the future nuclear waste disposal site, the confirming site investigations are conducted in the facility. The Olkiluoto site has been under thorough research for many years, and at the end of 2012, Posiva Oy left an application for construction licence for a nuclear waste repository. Confirmatory rock mechanics studies are still underway, related especially to the in situ stress, excavation damage zone and rock strength, which constitute the most important parameters describing the potential for rock failure and the extent of failure. For long-term safety assessment, the long-term stability (100 000 years) of rock and continuous spalling formations in highly stressed parts of the tunnel are crucial. Continuous spalling formations can create radionuclide transport routes in situations in which nuclear waste canisters are damaged. 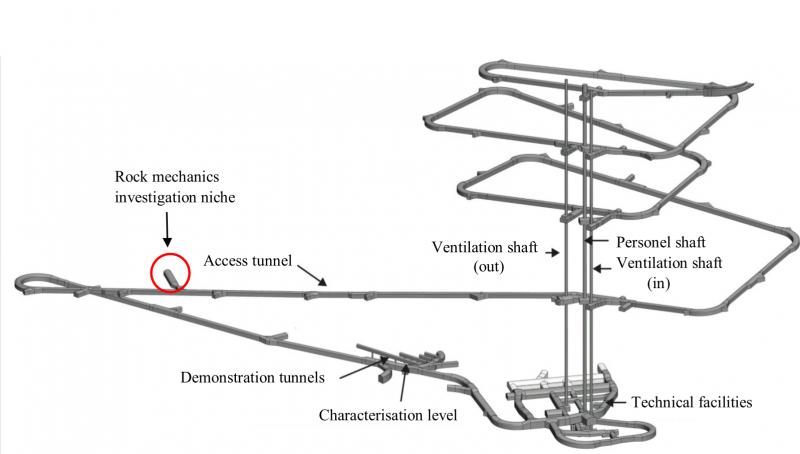 During the last twenty years, the personnel at SMCOY have contributed to Posiva’s rock mechanics research in Finland and also to collaboration projects extending to Sweden.