The rock and fracture properties change more significantly near the excavation (Davies and Bernier, 2003; Lanyon, 2011). The construction-induced excavation damage EDZCI extends in a drill-and-blast tunnel from 0.1 m to as much as 1.5 m into the rock, increasing permeability by two or three orders of magnitude (Tsang et al., 2005). However, in the TBM tunnel, the EDZCI extends from 1 to 3 cm with increasing permeability by one order of magnitude (Emsley et al., 1997; Davies and Bernier, 2003). Because of its significance, the damage caused by explosions are often simplified to be the only source of excavation damage in the D&B method context.

The excavation-influenced zone (EIZ) is typically used to distinguish the outer zone around the opening, where reversible changes caused by stress redistribution have occurred (Lanyon, 2011; Hudson et al., 2008; Davies and Bernier, 2003). Often the acronym EdZ (Excavation disturbed zone) is used; however, it can easily be confused with the acronym EDZ. Also the reversibility of the change conflicts with the term disturbed and it can be considered to have wrong implications. Therefore EIZ is suggested to be used, instead. The extent of EIZ is hard to define as stress redistributions can stretch far from the opening. 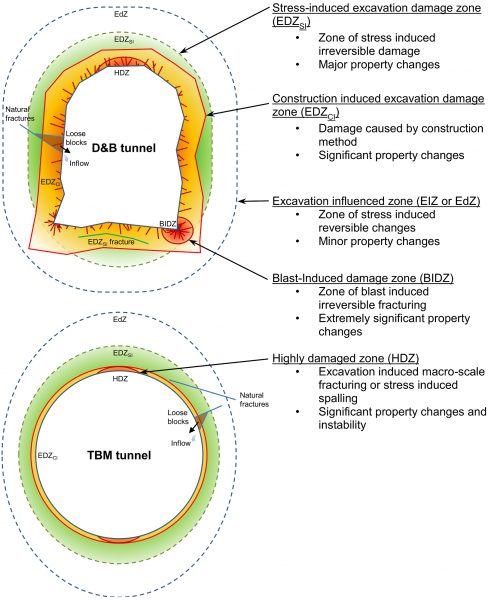 A compilation of damage zones with their definitions is illustrated in a generic stress field. (Siren, 2015)

The EDZCI and EDZSI are of opposite nature. Based on experience, the EDZCI decreases and EDZSI increases with depth (vertical distance from ground surface). This is because the deep tunnels experience higher stresses, thus more energy is required for propagating new fractures in blasting and thereby the depth extent of the EDZCI damage is decreased. Also the rock mass quality improves with depth and, for example in the nuclear waste disposal site in Finland, the first 100 metres are more fractured due to erosion and similar processes (Posiva, 2012). Contrastively, the EDZSI increases with depth due to increasing stresses and increasing rock quality. In deep mines, the depth of EDZSI can exceed the depth of EDZCI. In the LVDT cell stress measurement technique from tunnel surface, the measurements are conducted beyond the most severe EDZ.

Illustration of the use of LVDT cell near the tunnel surface.

With the EDZSI, EDZCI and EIZ being the main damage zones, literature distinquishes sections within these zones that are of particular interest. The highly damaged zone (HDZ) is the part of the excavation that has suffered considerably from stress-induced damage such as spalling or construction-induced damage such as crushed rock near blast holes. The macro-scale fracturing is also sometimes referred to as the blast-induced damage zone (BIDZ or BID in literature).  If the two excavation damage zones (EDZCI and EDZSI) cannot be distinguished, it is recommended to use the term EDZ to combine zone properties.

Davies, C. and Bernier, F. (2003). Impact of the Excavation Disturbed Or Damaged Zone (EDZ) on the Performance of Radioactive Waste Geological Repositories. Proceedings of the European Commission Cluster Conference and Workshop held in Luxembourg.